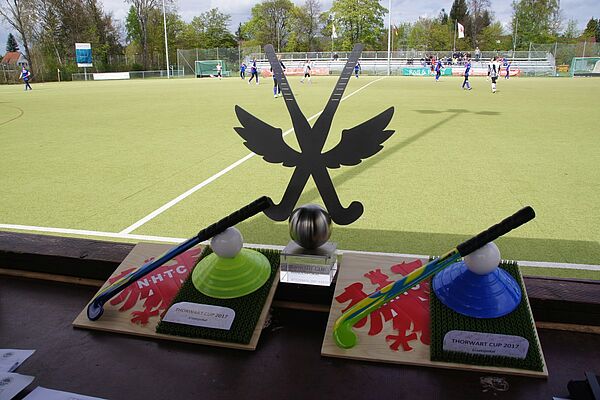 This name change has a reason. It serves the memory of the siblings Felicitas Schmidt - THORWART and Carl Otto THORWART.  Both were active members and supporters of the NHTC for decades. But not only that, the Nuremberg lawyer Carl Otto THORWART was a passionate field hockey player, who devoted himself with full commitment to the sporting development and promotion of field hockey in the NHTC for almost 50 years. For this purpose, just one example, the construction of the first artificial turf field, where the tournament was held on April 22-23, 2017, is largely due to the initiative of Carl Otto THORWART. He was the head of the field hockey department at NHTC at that time. And his sister, Felicitas, together with her husband, Peter Schamberger, then president of the club, actively supported the cause.

The memory of the two "THORWART siblings" is preserved today by the THORWART-JESKA FOUNDATION. In their spirit, the foundation is the main sponsor for HOCKEY YOUTH PROMOTION in NHTC. One part of the promotion is the support of the THORWART CUP. This includes the new challenge cup. It was designed by the famous Nuremberg artist, Hubertus Heß. His theme, to which he has dedicated himself for many years, are " angel wings ". These can also be found in the emblem and in the cup.

The Thorwart Cup is held annually